Soda, also referred to as soda pop, pop, a soft drink, or tonic, is a non-alcoholic beverage made of carbonated water, sugar or an artificial sweetener, and flavoring.

It is typically served cold or over ice. The most popular flavors of soda today include cola, lemon-lime, root beer, orange, and ginger ale.

The history of soda is actually pretty interesting, telling a story about how people and beverages have changed over the years.

Read on to learn how soda was first created and how it has become the bubbly drink we know today.

1767: Carbonated water was invented by Joseph Priestly when he took a bowl of water and suspended it over fermenting beer, which infused the water with carbon dioxide.

Another method of carbonization was invented in 1771 by Torbern Bergman who was hoping to improve his health by recreating the mineral water found in springs. Mineral water was believed to provide health benefits including aiding digestion.

1806: Benjamin Silliman purchased a machine for carbonating water and started to sell mineral water in Connecticut. When the water became popular, he built a larger machine and designed a pump room, opening the first soda fountains in New York City and Baltimore.

1809: Practical Treatise on Brewing was published, and included what is believed to be the first mention of ginger beer.

This combination of natural or man-made mineral water with ginger was believed to be healthy and was promoted by those who advocated temperance, or the avoidance of alcoholic beverages.

1832: The first mass-produced soda fountains were manufactured, and they included features that improved the taste of the soda they provided. The machines used carbonated water mixed with a syrup made from sugar and flavorings to make soda.

In 1891, Tufts, Puffer, Lippincott and Matthews, the four largest soda fountain companies, formed a trust. The trust, called the American Soda Fountain Company, had a monopoly in the fledgling soda industry, forcing smaller players out and controlling prices.

The first soda fountains were designed with the ability to store ice, which was used to cool the soda before the advent of refrigeration.

Many pharmacies added soda fountains because they could mix medicines with soda to improve their taste. Eventually, customers would come in the drugstore for the soda alone.

1876: Charles Hires introduced root beer at the 1876 Philadelphia Centennial Exhibition. The first commercially-available root beer was made from a recipe Hires created while on his honeymoon and included over twenty-five ingredients, including berries, herbs, and roots.

Root beer originated during colonial times, along with other soft drinks such as birch beer, ginger beer, and sarsaparilla beer, all of which were brewed for personal consumption but were not available commercially until Hires introduced his creation at the Exhibition.

1885: Charles Alderton invented Dr. Pepper at the drugstore where he worked in Waco, Texas. The drink was named after a friend of the owner of the drugstore, Dr. Charles Pepper.

1886: Coca-Cola was introduced in a soda fountain at Jacob’s Pharmacy in Atlanta, Georgia. John S. Pemberton invented the drink. As a pharmacist, he often used carbonated water and flavoring to mix with unpleasant tasting medicines to make them more palatable for his customers.

Pemberton’s accountant, Frank Robinson, named the drink Coca-Cola. In addition to coming up with the name, Robinson used his impeccable handwriting to design the script that the brand uses to this day. It remains one of the most recognizable logos in the world.

Coca-Cola is the number one selling soda in the world and one of the world’s most iconic brands. The Coca-Cola Company also markets Diet Coke, Sprite, Fanta and many other brands of soda worldwide. In some parts of the country, all soda is referred to by the brand-name-turned-generic term ‘coke.’

Coca-Cola was the first soft drink in space when it was brought on board the Space Shuttle Challenger.

The fountain used brine to cool the soda, eliminating the need for soda fountains to store ice in order to keep the beverages cold.

Soon several other companies began using this method of producing soda and made a large dent in the dominant market share of American Soda Fountain Company, eventually breaking up the trust.

1893: Caleb Bradham developed a cola drink he called ‘Brad’s Drink’ which he sold at his drugstore in New Bern, North Carolina.

In 1898 the drink was renamed Pepsi-Cola, for pepsin, a digestive enzyme, and kola nuts which provided its flavor. It was promoted as a digestive aid and energy booster.

1894: Coca-Cola was first bottled for retail sale when Joseph Biedenharn installed bottling equipment in the back of his soda fountain in Mississippi.

1899: A patent was issued for a glass-blowing machine which allowed bottles to be manufactured consistently.

This technology, in combination with the invention a few years earlier of a bottle top that would stand up to the pressure of the carbonated beverages enabled the mass production of soda. 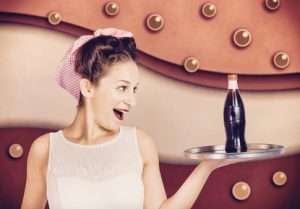 Coca-Cola, Pepsi-Cola, and other soda manufacturers built bottling plants around the country so that the products could be bottled regionally, ensuring that the carbonation would still be adequate when the product reached the consumer and that the soda would remain fresh-tasting.

1952: The first diet soda was introduced.

A sugar-free ginger ale was developed by Kirsch Bottling in Brooklyn, NY. The beverage, called No-Cal, was developed for diabetics and was sold locally.

The first commercially successful diet soda was Tab, introduced by Coca-Cola in 1963. Tab was marketed to dieters, rather than diabetics, and replaced sugar with cyclamates and saccharin.

Other soda manufacturers quickly followed suit and today nearly every soda flavor has a ‘diet’ version.

1970: The US government banned cyclamates, an artificial sweetener used in many diet sodas.

The Food and Drug Administration found that cyclamates caused cancer in lab rats. Saccharin, which was often used in conjunction with cyclamates, is still used in diet sodas. Other artificial sweeteners, such as sucralose and stevia, are also used today.

2009: Coca-Cola introduced the Freestyle machine, a self-service soda fountain with a touch screen. Customers can choose from 165 different Coca-Cola products and can mix different products together, creating a nearly infinite number of options for their drink.

The machines are available in fast food restaurants and other retail locations. The machines use concentrated ingredients dispensed by RFID (radio frequency identification) technology, which also transmits information about the amount of product sold and reorders product when necessary.

The ban was targeted at fast food establishment and convenience stores that often sell soda in 32-ounce or larger cups for immediate consumption. The measure passed initially but was later overturned by an appellate court, but not before it generated a national discussion about portion sizes, the link between soda and obesity and individual responsibility for making healthy food choices.

2015: According to Fortune Magazine, Beverage Digest, an industry publication, reported that 2015 per capita consumption of soda was 650 eight-ounce servings. This was the lowest rate of consumption since 1985 and marked the 11th straight year of declining sales.

The drop off in demand was attributed to consumers’ concerns about health, and their penchant for seeking alternatives like juice drinks and flavored water. The decline was greater among diet drinks than ‘regular’ soda, reflecting increasing concern about the effects of artificial sweeteners.

Soda manufacturers have responded to consumer concerns by introducing smaller six-ounce cans of soda, and by adding bottled water to their product mix.

Soda has come a long way from its humble origins in an Atlanta pharmacy to a food category all its own, with an estimated 300 different flavors. It was first viewed as having health benefits from aiding digestion to providing energy.

As the years went by and soda consumption skyrocketed, diet versions of popular flavors were introduced to rebuff claims that soda was high in sugar and calories.

More choice in package sizes and flavor combinations are soda companies’ answers to consumers’ concerns about soda today. The market for soda continues to evolve, but it’s clear that soda is here to stay.

To learn more about the history of soda, see:

A Brief History of Soda: https://www.sodaparts.com/blog/a-brief-history-of-soda/

Thanks for reading! I hope you’ve enjoyed this brief history of soda. What’s your favorite kind of soda? Tell us in the comments below.