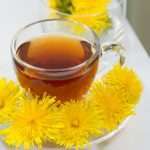 Dandelion tea has been making quite the splash recently. Apparently, this herbal mixture has been used for hundreds of years as a natural healing cocktail that can alleviate symptoms from various ailments, regulate the liver, improve kidney function, etc.

While these health claims don’t have much in the way of solid peer-reviewed research backing them up, what is undeniable is that there is more than one way to make tea, and options like dandelion tea provide a unique flavor profile that even non-aficionados should at least one to give a try once in their life.

So, how do you go about making this strange brew? Read on to learn how to make dandelion tea.

How To Make Dandelion Tea

You might be wondering what supposed advantages dandelion tea has over the run of the mill tea varieties that come from the Camilla Sinensis plant. Bear in mind that there is insufficient scientific evidence to support these claims, but proponents of dandelion tea are rather adamant about its ability to help:

Reduce Weight. Dandelion tea supposedly works as a diuretic agent, causing you to excrete more urine and shed weight as a result. In addition, proponents surmise that it helps inhibit certain enzymes that would normally make it difficult to lose excess body weight.

Alleviate Gastrointestinal Distress. In addition to quelling an upset stomach, dandelion tea is said to increase appetite and relieve constipation.

Promote Liver Health. The liver detox is one of the most widely touted abilities of dandelion tea. The how and why of this supposed ability are shrouded in mystery, though, the hardcore proponents of dandelion tea are adamant that it has something to do with the increased flow of bile through the body.

Keep in mind that other than the increased urine output the fact that dandelions taste good in salads and soups, there is very scant evidence supporting its purported abilities. It isn’t inherently dangerous to drink dandelion tea, though, and you might want to try it just for the taste.

If this is the case, you’ll have to get your hands on some dandelions. As the name suggests, they are the main ingredient in dandelion tea. That annoying weed you’ll often find growing in unkempt fields or invading your backyard. Though they might be somewhat available in either location, procuring them from these sources could prove to be a precarious venture.

Not only will finding enough dandelions to give yourself a steady supply be rather difficult, but there’s also a chance that the dandelions you find in the wild just aren’t good enough for your tea. There could be insects lurking about, or who-knows-what kind of pesticides seeped into the core of these wild plants. To make your dandelion tea right, you’re first going to have to grow your own dandelions.

Your immediate reaction might well be, “it’s a weed, it can grow anywhere, right?” While it’s true that dandelions are especially hardy, you’re going to be using these for your tea, so you want to optimize their growth to ensure a better-finished product. You’ll want to grow these indoors so you can keep them from spreading wildly, so the first thing you’ll need to do is obtain some pots. About 6-inches or deeper should be suitable. Make sure the pots have ample drainage at the bottom and are big enough for multiple dandelions. We’ll want to grow as many as possible for the tea, so large diameter pots that let you place multiple dandelions together at about 1.5 inches apart would be best.

Once you have your pots picked out, you’ll need to add soil and plant your seeds. Make sure that each seed is only barely covered, about 1/8 of an inch deep into the soil. You’ll then need to spray the soil lightly, getting the seeds nice and damp. This should be done periodically to keep the soil moist throughout the dandelion growing period.

You’ll need to make sure that the dandelions get an appropriate amount of light and heat. Though dandelions can survive in soil that’s as cold as 50 degrees, they will thrive much better when the soil temperature is near 77 degrees. To achieve this, use a bright indoor area, like a room near a window with lots of natural light. If you give them enough full sunlight, they should begin to sprout within two weeks’ time.

Once the dandelions have started to grow, you’ll need to give them a boost through proper feeding. Blend some fertilizer, an 8-16-8 mixture combined with a gallon of water, and fertilize the soil once the dandelions are between 4-6 inches high.

As they continue to grow, repeat the fertilization process twice every month for the duration of their growing season. You should do this in addition to regular watering, and take not that fertilizer watering will replace one regular watering during your growing timetable.

Speaking of which, you should get in the habit of watering your dandelions whenever the top layer of soil dries out. Water thoroughly, until you see water coming out of the drainage holes at the bottom. Once your dandelions are mature, it will be time to harvest them for use in your tea. For the tea, you’ll need to cut off the heads once the dandelion starts to flower.

Remember to leave the base behind. As dandelions are perennial plants, it will grow back next year if you nourish it well. If you want to, however, you can pull out the entire root system and use the roots to enhance your tea, and the greens to use in salads.

A few things to keep in mind. First, there are several varieties of dandelions you might try to grow, including the common dandelion, the French dandelion, broad-leaved dandelion, and thick leaved dandelion. There may be some variations in taste between the varieties, but the growing process is much the same.

By their nature, dandelions are bitter plants, but you can take steps during the growing process to try and curtail their bitter taste. For instance, using partial shade to grow your dandelions may cause them to mature somewhat slower, but it will also help to counteract the bitterness they would normally have. Alternatively, you might try blanching the dandelion leaves, covering up the plant for a few days before you harvest them. You might even try harvesting the leaves early, as young leaves taste less bitter than older leaves in most cases.

Thankfully, while growing indoors, you probably won’t have to watch out for any pests that might attack the dandelion plants. As mentioned, these are strong weeds and will grow under a range of conditions. Keeping them indoors where they have even fewer stressors to contend with only optimizes the chance that they will grow to superbly healthy condition. 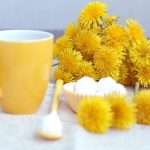 Your brewing method for your dandelion tea will take on one of several variations. The most straightforward method is to take the roots or dandelion flower and place it in boiling water. Let the flavor permeate the water for a time, usually 30 minutes, then remove the roots and flowers. The remaining liquid is your simple dandelion tea which you can enjoy plain or with honey or sugar.

You might instead try creating a dandelion tea beverage that is more akin to coffee. You can do this by cleaning off the roots, chopping them up, then roasting the chopped bits for around two hours at 300 degrees. You can then take these “dandelion grounds” and steep them in boiling water for 10 minutes to create your stronger dandelion drink.

Alternatively, you could take this dandelion mixture and work it into morning juices for a kind of tea/juice blend. You might even take to juicing the whole dandelion plant in combination with other vegetation for added health benefits.

No matter which variation of the dandelion drink you try, remember that it’s going to be bitter unless you took steps during the growing process to counteract this or added plenty of sugar and other ingredients post-brew to ease the taste.

Dandelion Tea is a tea brewed from the roots and flowers of the dandelion. The dandelion is a common weed that grows in many fields and yards around the world. It is bitter tasting, but still suitable for creating this drink.

There are many supposed health benefits to dandelion tea, but none of them are backed up with consistent peer-reviewed research, making the impetus for trying the concoction out purely based on curiosity or a desire for the taste.

Growing dandelions for tea is a fairly simple task, as these weeds are hearty and require very little prompting to thrive. You should grow them indoors as opposed to outdoors so that they do not spread uncontrollably.

You’ll need to keep them in deep pots with plenty of room for the dandelions to grow. When they are mature, and it is time to harvest them, you can either take just the flowers and leave the base intact, so the plant will grow back next year, or use root and all to roast and turn into a coffee-like dandelion tea.

If you want to find out more about dandelions and what they are capable of, check out this page that goes over the unique biology of these hearty weeds.