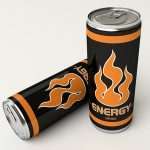 Is there any more popular caffeine supplementation method than the energy drink? Energy drinks are a popular method for people to gain a little boost throughout their day. Normally, they exist in some soft drink form and contain various levels of sugar, caffeine, and related stimulants.

Though widely regarded among those that consume them regularly as effective, various studies and research have pointed to the fact that caffeine is the only ingredient in these drinks doing the heavy lifting.

Furthermore, there are notable side-effects associated with traditional energy drinks ranging from minor allergic reactions to full on addiction and the onset of diabetes. This has left some seeking out similar but safer alternatives, of which newer “organic energy drink” varieties have presented themselves. Do these drinks pass the test when it comes to providing a choice free of artificial additives?

So-called organic energy drinks are like their traditional counterparts but claim to be a healthier alternative because they contain “natural” ingredients as opposed to the lab-grown options. This includes the removal of artificial preservatives, natural flavoring from juices, natural colors as opposed to food dyes, natural sugar, no pesticides or chemical residue, and (most importantly) natural caffeine obtained from tea, guarana, or coffee.

On the surface, this seems fantastic, as many of the side-effects from traditional energy drinks came because of unnecessary additives. Drug interactions and allergic reactions, for instance, from the way the chemicals within these standard energy drinks would combine with medications that people take or abnormal levels of stress hormones building up from energy drink consumption.

The fact remains, though, that even organic energy drinks are packed with heightened levels of caffeine and sugar. Thus, overconsumption can result in some of the same problems. Jitters, caffeine highs, anxiety, and headaches are all still real possibilities, even when consuming organic energy drinks, so a modicum of caution is still in order when using these products. A word of warning, courtesy of the NIH:

“Although there’s very limited data that caffeine-containing energy drinks may temporarily improve alertness and physical endurance, evidence that they enhance strength or power is lacking. More important, they can be dangerous because large amounts of caffeine may cause serious heart rhythm, blood flow, and blood pressure problems.”

With that warning out of the way, let’s look at three popular organic options while comparing their ingredients and overall effectiveness.

Popular energy drink manufacturer Rockstar’s organic option was met with much fanfare. Slashing the calories by 30% but retaining the same level of caffeine (160 milligrams/16 ounces), all of which is extracted green coffee beans, they’ve set it up as the healthy alternative to standard Rockstar.

The caffeine level works out to about 10-milligrams per ounce, putting it slightly under the standard cup of coffee (11-milligrams/ounce) but higher than a glass of Coca-Cola Classic. In other words, it’s just abnormally strong soda-water, with no other forms of “energy” aside from caffeine. You can expect the normal, though subdued, kind of buzz you would get from coffee with this drink. An increased level of wakefulness and alertness should take hold within 15 minutes of consuming Rockstar Organic, and side effects like allergic reactions should be reduced thanks to the omission of many of the ingredients that the standard version of the drink contains.

The health conscious still knock Rockstar Organic as being just as unhealthy as original Rockstar, even with the reduced ingredient listing. The claim is that the increased levels of these ingredients can cause health effects of their own. Citric acid, for instance, is related to changes in heart rate and may induce dizziness or pain. Guarana, on the other hand, could cause nervousness or insomnia in some individuals, along with heightened blood pressure.

Of note is the fact that this drink still has 46 grams of sugar. For reference, The American Heart Association recommends no more than 36 added grams of sugar per day for average men, and 25 added grams for women. Rockstar Organic exceeds that with one can, so although you’ll be well within your caffeine allotment (400-milligrams/day), this drink could pose an issue for anyone trying to maintain healthy sugar levels.

The “natural flavors” in Rockstar Organic are a blend of tropical fruits, along with the guarana and hints of what might be yerba mate. Reading reviews, most people are either in love with the taste or find it repulsive, with very little middle ground between the two extremes.

Scheckter wears its organic credentials proudly, touting their drink contains no artificial ingredients, no high fructose corn syrup, no taurine, no inositol, and no synthetic caffeine. They claim that their product line is inspected by the USDA, uses no refined sugar or GMOs (genetically modified organisms), and is approved by organizations like Informed Sport and the Vegetarian Society.

Their ingredient list is composed of green coffee bean extract, guarana, ginseng, green tea, ginkgo biloba, pomegranate juice, lemon juice, elderberry juice, raw sugar, and natural spring water (all organic). There are various claims regarding the caffeine content, with some saying there are about 80-milligrams per can, and others claiming about 135-milligrams of caffeine per can.

Each can is about 8 ounces (compared to Rockstar Organic’s 16 ounces), so you’ll note that you’re getting a much higher concentration from the Scheckter’s brand either way. Additionally, the caffeine might be the only ingredient providing any kind of stimulation. With that comes all of the dangers of overconsuming caffeine, so tread lightly.

Sheckter’s, or at least, their proponents, also claim that the use of raw cane sugar in their drink means that they don’t have to use as much of it to sweeten each can, hence providing a healthier finished product. While this is partly true, and Scheckter’s only includes 25 grams of sugar per can, the cans are smaller, and the temptation to drink more than one per sitting is greater. Furthermore, the idea that raw sugar is inherently better than plain sugar is one that is shaky at best.

As for the taste, it’s a mixture of the fruity flavors spelled out in the ingredients. Drinkers describe it as lightly sweet and tropical.

This Canadian original bandies about many similar health claims as the previous two options. USDA certified organic, no GMOs, vegan-friendly, etc. Like Rockstar and Sheckter’s they use organic caffeine, though, GURUs is sourced mainly from green tea extract and guarana as opposed to green coffee beans. The other ingredients in GURU include sparkling water, can sugar, grape juice, citric acid, Echinacea flower extract, panax ginseng, and “natural flavors.”

As with Scheckter’s, their reliance on cane sugar is more of a smokescreen than anything else, as sugar is still sugar regardless. They do offer a sugar-free variety of the drink, however, which might be a more appealing alternative to the sweetener-conscious energy drink fans out there.

Guru also makes the claim that the addition of ginseng in their drink comes with wide-reaching health benefits, such as increased energy & stamina, a boost in cognitive performance, and powerful anti-inflammatory properties. They support these supposed benefits with the use of ginseng in “traditional Chinese medicine.” At best, these claims are speculative, with the NIH in no uncertain terms stating: “There’s currently no conclusive evidence supporting any health benefits of Asian ginseng.”

In fact, there may be a chance that ginseng causes headaches, sleep problems, and digestive problems, in addition to causing fluctuations in blood sugar and blood pressure. It might also interact with certain medications, the chance of this is low. In general, thankfully, ginseng seems safe for most people, but you shouldn’t expect the levels of ginseng contained in GURU to do all that they purport in their advertising copy.

The taste of GURU is said to be light and mostly dominated by the citrus notes from the lemon juice concentrate. It isn’t too sweet to the taste, and many regular consumers note that it’s rather similar to club soda with just a hint of sweetener and lemon.

Energy drinks are caffeinated beverages increasingly enjoyed by young adults to provide temporary a boost in energy and alertness. Traditional energy drinks have a reputation for containing superfluous chemicals with limited health benefits, like taurine, which has led many companies to try releasing organic alternatives to present to consumers as a healthier option.

While organic energy drinks source their ingredients naturally, do away with many of the extra chemicals that customers have been wary about, they still contain high levels of caffeine and sugar, and should not be thought of as “healthy” by any stretch of the imagination.

These organic options are a step in the right direction, but anyone interested in consuming them should still be wary about the effects of overconsumption of caffeine and sugar, and moderate their intake appropriately.

If you’d like to learn more, feel free to consult the University Of Maryland’s fact sheet on energy drinks; or, take a look at the FDA’s warnings about energy drinks and the dangers of too much caffeine. Remember to drink responsibly.